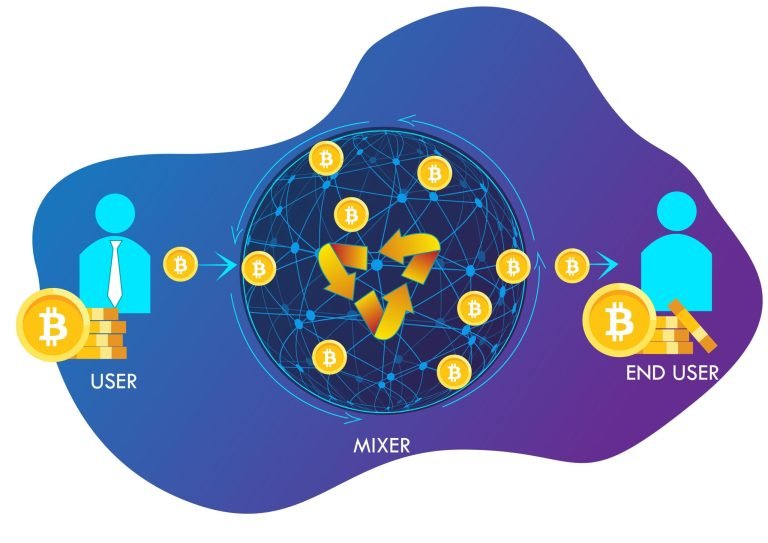 Coin mixing is simply the way of ensuring the anonymity of any cryptocurrency transactions is kept intact.

Quick takes on coin mixing, in this piece, you’ll learn the:

Imagine a baker who needs to make an apple pie. The baker needs several condiments to come up with that pie. Ingredients like flour, sugar, egg, butter, baking apples, etc. You get the idea, right? In the end, what you get looks starkly different from the ingredients that went in.

Something similar happens when you think about coin mixing. But first, what is coin mixing? Think about the way the blockchain works especially the bitcoin network. It’s an open ledger of transactions. Suppose you decide to send some bitcoins from your wallet address to another party. In that case, anyone who knows your wallet address otherwise called public keys can simply copy and paste it into an explorer to get all the details they need. Stuff like the time when the coins were sent, amount and the receiving wallet address, are all visible. In fact, even the next address the receiver transfers their coins to is all available on the explorer. Well, that is supposed to be how the blockchain works. Radical transparency than what it used to be.

But not everyone might want to have their transactions exposed in this manner. Emphatically, one of the core tenets of cryptocurrencies is privacy. Hence, to avoid the scenario painted above, you may decide to opt for coin mixing.

What is Coin Mixing?

Coin mixing is simply the way of ensuring the anonymity of any cryptocurrency transaction is kept intact. In other words, it’s the extra step a crypto user takes to obfuscate the origin and endpoint of a transaction to maintain privacy. Just like the apple pie baker who mixes several condiments to whip up that pie, in the end, you know you are eating an apple pie because of the taste but can’t really pick out the components. In the same vein, coin mixing ensures that.

How do coin mixers work?

Coin mixers are software companies who receive cryptocurrencies from several people and mixes them. They then send smaller portions to the addresses each of the contributors provide after mixing. However, the balance anyone who engages in coin mixing receives is lesser than what they sent to the coin mixers. This is because the service comes at a fee, usually between 1 – 3%. Popular mixers include Coinmixer.se, Helix, and Bitcoin Blender etc.

So now we know what coin mixing is and a broad idea of why anyone may engage in it. However, let’s really explore more reasons.

Reasons why people engage in it.

The apparent assumption is that only individuals engage in coin mixing. But that is not usually the case. Even large corporations who deal in cryptocurrencies equally engage in it also. And their reasons are not far-fetched. Shielding their operations from competitors is a critical survival strategy, and coin mixing may help to protect that for them.

Also, high net worth individuals who transact in cryptocurrencies may opt for these services to shield them from hackers who may be monitoring their wallet addresses.

And lastly, criminals use this service to help with their illicit trade and money laundering activities. The fact that coin mixing helps to obfuscate a transaction trail makes it even easier for criminals to indulge in the act. However, with recent advancement in blockchain analysis, crypto tracing tools are constantly developing to help with tracking and exposing illegal crypto transactions which coin mixers may try to hide.

Differences between Coin Mixing and Coinjoining

From the explanations given above, it’s obvious coin mixers are centralized companies. They receive and then blend these cryptocurrencies from different addresses together. The emphasis is on the fact that just a single entity facilitates the mixes. A different approach would be to opt for Coinjoining, which is more decentralized. Coinjoin involves the combination of inputs by multiple users into a single transaction. More than one party usually come together and pool their transactions together. Each will provide inputs and desired outputs. As all of them combine their inputs, it becomes impossible to say with certainty which output belongs to which user.

Advantages and Disadvantages of Coin Mixing

This practice mainly ensures transaction privacy. Privacy is always a hot topic any day, especially to crypto purists and idealists. They argue in favour almost complete anonymity in financial transactions. Regulators frown at this nonetheless. Also, hackers who may want to target crypto personalities because of their digital asset will have a hard time doing this because of coin mixing. Additionally, it helps to maintain the competitive edge of companies dealing in cryptocurrencies which may want to shield the supply chain and other aspects of their financial operations from their competitions.

But coin mixing also comes with disadvantages. These range from the centralized nature of coin mixers. Many at some point have been reported to shut down. Some may even close down with user funds trapped in them. Another disadvantage is IP exposure. Sending crypto to coin mixers requires one to access their website, this may leave IP trails which may eventually expose one to the very dangers they seek to shield themselves from. This can be easily remedied by opting for Coinjoin instead. Lastly, crypto mixers charge between 1 -3% as fees for their services. This may not be substantial for small transactions but becomes insanely expensive when the transaction is huge.

How Bitcoins are taxed: Crypto investors must know