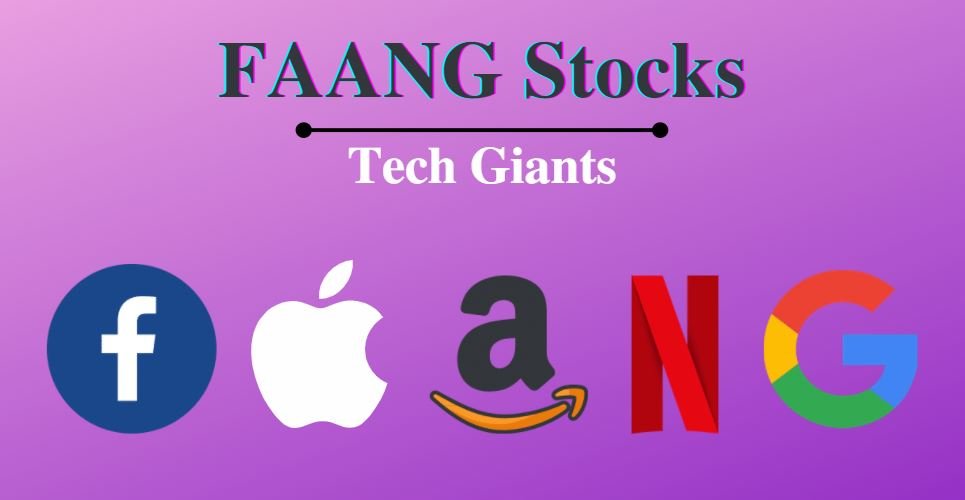 What Is FAANG? – Definition, Why It Is So Popular & How To Invest In It?

It is almost difficult to discuss the stock market without including the FAANG. The S&P 500 Index includes a substantial number of IT companies. Have you already heard the phrase FAANG and wondered what it meant? Then, in this article we will take a look at FAANG stocks.

What Are FAANG Stocks?

FAANG stands for “Facebook, Apple, Amazon, Netflix, and Google(Alphabet),” and refers to the stocks of the five biggest and best American technological companies. In 2013, Jim Cramer, the host of CNBC’s Mad Money, invented the term after praising these companies for just being “completely dominating in their marketplaces.” The acronym “FANG” was used, with Apple (the second “A” in the acronym) being added in 2017.

Due to their reputation as being among the most trustworthy and stable, FAANG stocks are most typically traded over the long term. These are all the organizations that have redefined engaging, socializing, shopping, and entertainment, and are some of the finest companies not only within the United States but throughout the world.

FAANG is well-known in the consumer industry or the first choice of buyers, but they also have a market share of around $4.1 trillion at the start of 2020. Though some claim that FAANG isn’t at all worth the success and recognition it has acquired in recent years, some consider that these companies’ financial performances constitute them the leading names.

Mark Zuckerberg founded Facebook in 2004 and it went public in 2012. It has now expanded, becoming the world’s largest social media platform, with over 1.8 billion daily users worldwide. Facebook, Instagram (bought in 2012), Facebook Messenger, and WhatsApp (bought in 2014) now are four of the world’s most popular social media platforms. It generates money by showing advertisements to users as they scroll across photo and video feeds.

Steve Jobs, Steve Wozniak, and Ronald Wayne founded Apple in 1976. It all began with the purchase of personal computers. Nowadays it sells computers, smartphones, and other technological devices such as iPads, iPods, smartwatches, etc. There are currently one billion iPhone users worldwide. Apple makes its own hardware and software (IOS), unlike all the other computer and smartphone companies. Apple has also made investments in cloud storage via iCloud and TV streaming via Apple TV+. Apple even has a streaming music app, Apple Music (which has 72 million users), and several other apps available on the iStore (e.g,. Apple books).

Amazon is the world’s biggest B2C e-commerce company. In1995, Jeff Bezos launched Amazon as a book rental service. Also, it sells consumer electronic devices like the Amazon Kindle and Echo. Amazon is also investing in Internet of Things (IoT) solutions. Amazon Web Services, which has over 1 million subscribers worldwide, also has invested in cloud computing. Amazon Prime, an online streaming platform that was launched, currently has 150 million customers.

Netflix was founded on August 29, 1997, by Reed Hastings (who is now the CEO) and Marc Randolph as a subscription business that enabled users to rent DVDs via mail. It switched to an online movie streaming platform in 2007. It progressively transitioned to streaming movies before introducing original material. Netflix is now one of the world’s largest purchasers of film and television productions, with even more than 200 million global subscriptions.

Google’s parent company, Alphabet, is the world’s most popular search engine, with 3.5 billion daily searches. Larry Page and Sergey Brin established Google in September 1998. Advertising shown through Google’s search engine as well as other apps is the company’s primary source of revenue. YouTube, a video-sharing and social networking platform with 2 billion monthly users, is also owned by Google. Amongst Google’s other services are Google Maps, Google Play, Google Drive, and Google Chrome. This also launched YouTube Music, a music streaming service, in 2015.

Why Are FAANG Stocks So Popular?

Users are familiar with the five stocks which thus compose the “FAANG” acronym: Facebook (FB), Amazon (AMZN), Apple (AAPL), Netflix (NFLX), and Alphabet (GOOG). FAANG stocks are renowned for a variety of reasons, the most notable of which is their outstanding track record of growth and future development potential. Its overall value is in the trillions of dollars, and so many investors own a small share of these companies through an exchange-traded fund or mutual fund in which they are prominent holdings.

How To Invest In FAANG Stocks?

As each FAANG company is listed on the New York Stock Exchange (NYSE) or the NASDAQ, many investors will find it simple to purchase shares. An online brokerage account with E-Trade, Fidelity, TD Ameritrade, or Robinhood is the simplest way to get started. It’s important to keep in mind that FAANG stocks are not cheap.

And in case If you are priced out of FAANG stocks or choose not to own individual shares, you can still get access to them via a variety of mutual funds and exchange-traded funds (ETFs). FAANG stocks will almost certainly be included in any index fund tracking the S&P 500 or the wider stock market. Large-cap funds, as well as funds concentrated on the technology and communications industries, will also provide similar exposure.

FAANG stocks are the most powerful stocks on the market, not just in the United States but around the world because the products and services they provide are used all over the world and have become an integral part of our daily lives. With new advancements in the field, the world of technology, as well as the companies we refer to as “tech giants,” is always evolving. Even as FAANG stocks continue to offer value to investors and traders, in the next decade, there would definitely be a new wave of tech stocks that offer similar growth.

FAANG stocks are excellent additions to any investor’s portfolio. All these companies are at the forefront of technology and innovation, and as a result, they are not overvalued. Such organizations, on the other hand, are higher in the long run than in the short run.

4. Which FAANG stock is best?

Because all of the FAANG stocks are concentrated on distinct services and serve different segments and customers, they cannot be compared and contrasted.

Apple is the only company that pays dividends on a routine basis and other companies haven’t ever paid dividends since their establishment.

For a long time, FAANG stocks have been among the most renowned in the market and have produced some of the most enticing returns over the last decade. It is also popular among investors because of its high returns, reliability, market dominance, innovation, and global reach. So now you know what FAANG stocks are, you may consider market conditions, your financial objectives, plus your risk tolerance before attempting to buy in FAANG on the NYSE.