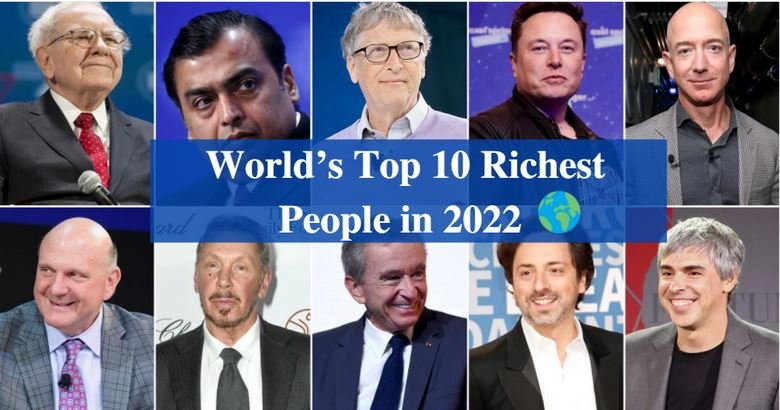 Elon Musk is one of the world’s richest persons. Elon Reeve Musk was born on June 28,1971, and holds citizenship of three countries: South Africa, Canada, and the United States. Elon Reeve Musk is a philanthropist, an engineer, a technology entrepreneur, and an industrial designer. He went to the University of Pennsylvania to finish his degree (BS and BA). He founded SpaceX and is now the CEO of Tesla, a company that manufactures electric vehicles. On December 17,2016, he launched The Boring Company, and in1999, X.com. Neuralink, OpenAI, and Zip2 were among the companies he co-founded after that. Musk’s net worth had risen by $29 billion in a year as of Feb.12, 2022. He is the driving force behind the revolution of transportation on both space and on Earth.

William Henry Gates III is an American who was born on October28, 1955. He is a former Harvard University student who dropped out. He is a philanthropist, a business tycoon, a software developer, an investor, and an author. From1987, Bill Gates, a co-founder of Microsoft, has constantly been on Forbes’ list of the world’s richest persons. He departed his hands-on role at Microsoft in2008, but he continues to work as a technological advisor.  He co-founded Microsoft as well as the Bill and Melinda Gates Foundation. He also serves as a co-chairman of the Bill and Melinda Gates Foundation. Bill Gates is a well-known figure in the tech industry.

Lawrence Edward Page is an American who was born on March 26, 1973. He got his bachelor’s degree from Stanford University. With 92.5 billion monthly visitors, Google is the most popular site on the planet. He is well renowned for being one of Google’s co-founders. From 1997 to August 2001, he was also the CEO of Google. After that, he became the CEO of Alphabet Inc., which is Google’s parent company. He and his undergraduate friend Sergey Brin co-founded the Google search engine. He has invested in Planetary Resources, a well-known space exploration company, as well as a number of other start-ups such as Kitty Hawk and Opener.

Warren Edwart Buffett was born on August 30, 1930. He is a philanthropist, an investor, and a businessman. He completed his bachelor’s degree from the University of Pennsylvania. Warren Buffet is the CEO, chairman, and largest shareholder of Berkshire Hathaway, an American multinational holding company. He is widely regarded as one of the world’s most successful investors. He began investing at an early age, which greatly aided him in the stock market. Geico Insurance, Duracell, and Dairy Queen Restaurant are just a few of the well-known companies in which his company has a significant shareholdings.

Bernard Jean Arnault is a French billionaire who was born on March 5, 1949. Arnault completed his engineering degree from Ecole Polytechnique. He is the Chairman and CEO of LVMH, the world’s largest luxury goods conglomerate. The two businesses eventually merged to establish the company. Moet Hennessey is a merged champagne and cognac factory. Louis Vuitton is indeed a very successful luxury fashion brand, while Moet Hennessey is a merged champagne and cognac manufacturer. Louis Vuitton, Hennessey, Marc Jacobs, and Sephora are among the brands owned by LVMH.

Sergey Brin was born in Moscow, Russia, on August 21, 1973. He completed his bachelor’s and master’s degrees from the University of Maryland College Park and Stanford University, respectively. Along with Larry Page, he co-founded Google. He is the President of Google’s parent company, Alphabet Inc. In December 2019, he, also, stepped down as CEO of Alphabet Inc, but he remains a shareholder, board member, and employee of the company.

On August 17,1944, Lawrence Joseph Ellison was born. He is a business tycoon, philanthropist, and investor. His education was finished at the University of Chicago. Larry Ellison is an American businessman who co-founded Oracle Corporation and served as its CEO until September 2014. He currently serves as Oracle’s executive chairman and chief technology officer. Oracle is the second-largest software company in the world, offering a broad range of cloud computing programmes, and also Java and Linux code and also the Oracle Exadata computing platform.

Mukesh Ambani, an Indian businessman, has become Asia’s richest man. Mukesh Dhirubhai Ambani was born in India on April 19, 1957. He is Reliance Industries Ltd’s Chairman, Managing Director, and biggest shareholder. His father, Dhirubhai Ambani, established his first textile mill in 1966, and his company, Reliance Industries, was listed on the Mumbai stock exchange in 1977, attracting a large and loyal shareholder base. Mukesh Ambani’s primary sources of income include petrochemicals, oil and gas, and telecommunications.

Steve Ballmer is well known as Microsoft’s former CEO. He was the 30th person hired by Bill Gates. Ballmer bought the Los Angeles Clippers basketball team for $2 billion in2014, just after stepping down as Microsoft’s CEO. His fortune comes from the team’s success as well as his continued ownership of Microsoft stock. As of 2022, Steve Ballmer’s net worth is estimated at $106 billion.